Origins of the MLSA

The late 1950’s saw an increasing demand from laboratory technicians for improvement and harmonisation in pay and conditions in the rapidly expanding hospital laboratories. However the formation of a technicians' section in the WUI was only a partial success (less than 50 members) as the majority of technicians did not wish to be involved in a union. In discussion with the founding members, ‘young’ Jim Larkin (General Secretary of the WUI), suggested they look to the affiliation model that the WUI had used to promote white collar union expansion in the 60’s. The affiliation model was used by ‘young’ Jim Larkin to allow Vocational Groups to have the obvious benefits of belonging to a larger union and yet retain control of their own Association. His vision was to use affiliation to provide a bridge for professional associations to cross over to main stream unionism. The WUI considered it had: - “an obligation to spread trade union organisation and to assist specialised groups of employees to gradually acquire an understanding and a better appreciation of how trade unions work, and of their policy and objectives”.

The Medical Laboratory Technicians Association (MLTA) was founded in 1961 as a professional association for medical laboratory technicians and an affiliate of the WUI. Membership rose rapidly from 70 in 1961 to 926 in 1981.

In 1968 a salary claim was submitted to the employers and rejected. MLTA members voted for industrial action and a limited but well organised strike took place in 1969. The outcome was successful and it was the only time in the Association’s history that it had to resort to a national strike to achieve its goals.

The affiliation model allowed negotiations to be carried on under the direction of the General Officers of WUI and the negotiation licence of the WUI and as such there was no need for the MLTA to be registered as a trade union and have its own negotiation licence. However, the changes brought about by the 1990 Industrial Relations Act and the amalgamation of the FWUI and ITGWU to form SIPTU changed the landscape for the old affiliates.The MLSA was finally registered as a trade union in 2004 and obtained its negotiating licence in July 2005, becoming a full member of the Irish Congress of Trade Unions (ICTU) in the same year.

Since its foundation the MLSA has had three General Secretaries: Cyril Keogh (1961 – 1992); Helen Franklin (1993-2003) and Terence Casey (2004 to present). The Association moved offices from Parnell Square to its current offices in Liberty Hall in 1995.  An Expert Group Report in 2001 formally renamed Laboratory Technicians as Medical Scientists.

To mark the 50th anniversary of the union in 2011, the MLSA published " A Unique Association - A History of the Medical Scientists' Association 1961 - 2011", written by the noted Irish labour historian, Francis Devine. A copy of the book was sent to each MLSA member in 2012 and can be found on the bookshelves of most hospital laboratories and libraries. 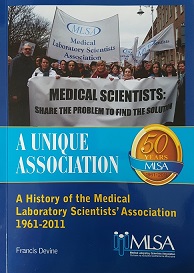